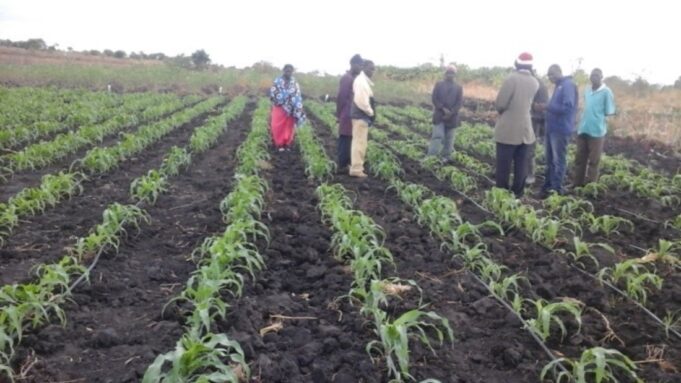 Youths have been trained in climate-resilient agricultural practices by a non-governmental organization called “Conserve with Benefits.”

The participants in this training are from the Lilongwe district’s Ukwe EPA, TA Kabudula.

Collins Mittochi, Team Leader for Conserve with Benefits, said in an interview that many youths in rural areas are unemployed and have nothing to do, so farming can be a way for them to have something to do, which is why they introduced the concept to ensure the youth are well trained on how to do farming.

“Our farm here is a youth test whereby we are doing different experimental agricultural practices that are more resilient to climate change. So we ended up here in Ukwe simply because we have seen a lot of youth are depending much on the environment especially trees to cut them for charcoal production.

“We thought it is wise that we should give them an alternative which they can do on their own after our training and everything. So we introduced this concept here so that the youths can be training proper agricultural practices and later on they can implement their farms and also involve some of their friends and their families in the practice,” said Mittochi.

“We started with only 30 but we have only had 6 dropouts because of different reasons but the rest of them, are still committed to the project. What you have seen here is rainfed agriculture, in the next month we are going to start our winter cropping so all of them are still motivated to be with us. When it comes to the yield on percentage, we can believe we will get 70 % of the yields that we are expecting,” said Mittochi.

In his remarks, Agriculture Extension Methodologies Officer, Webster Jassi said he was impressed with the organisation. It has managed to entice the youth into agriculture because naturally it is believed that agriculture is for the elderly and not for the youth.

Jassi further added that it is very important for farmers these days to use improved agriculture technologies that are being recommended by the Ministry of agriculture and indeed that is being applied by the youths at the Youth test farm.

He added that farmers should at least embrace the spirit of being close to extension workers who are the custodians of all these technologies so that productivity increases for the good of their livelihoods.

Yosefe, one of the youth at Youth test farm, said he has benefited much from the organization and he has gained experience as well as learned different agricultural method practices.

The organization is working in two countries at the moment, Malawi and Kenya with the same project and has managed to train and work with 24 youths in T/A Kabudula Ukwe EPA.