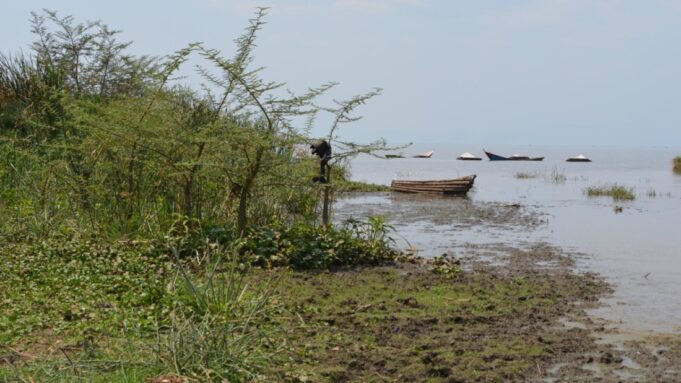 With its many lakes, Malawi has a rich fishing tradition and nearly 1.6 million people in lakeside communities depend on fishing for their lives and livelihoods.

But Lake Malombe has seen its fish species disappear and its ecosystem damaged.

Willard has been fishing on the shores of Lake Malombe in the Republic of Malawi for more than 40 years. The fisher comes from Chipalamawamba, a village in the country’s south. He says that, over the years, environmental degradation and overfishing of the lake have taken a heavy toll on the fish and fortunes of local fishers.

“The fish numbers started dwindling years ago,” Willard says. “All the banana plantations were destroyed; the grasses and trees were cut down for building homes, and now the river banks and lakeshores are bare. The fish don’t have enough breeding sites.”

Niklas Mattson, FAO’s chief technical officer in Malawi, says several fish species including the popular Chambo, a type of tilapia, have all but vanished in recent years.

“Lake Malombe is on average only three metres deep, and the tilapia build nests on the bottom for breeding. But the nkacha nets, which are the most common, tend to destroy these nests and cause turbidity and that disturbs the fish and their breeding,” says Mattson.

Small-scale fishers are also competing with larger fishers, who have bigger boats and are better resourced with more elaborate fishing gears and nets. This activity is not only decimating fish numbers, but it is also damaging the lake’s fish breeding grounds, relates Mattson.

Climate change is also threatening the lake’s future productivity as temperature changes and fluctuating rainfall impact the fish, their habitat and biodiversity.

FAO is working with Malawi’s Department of Fisheries, Ministry of Forestry and Natural Resources to build greater resilience and to combat the impact of environmental degradation in the beleaguered fisheries sector, especially among the riparian communities of Lake Malombe.

Supported by the Global Environment Facility, the project, entitled Fisheries Resilience for Malawi (FIRM), promotes an ecosystem approach to fisheries management, a holistic approach to managing fisheries and living aquatic resources and promoting conservation and sustainable use of the whole ecosystem.

“In addition to overfishing, local communities face the added pressures of climate change, so this project is a matter of urgency,” says Mattson, who is leading FAO’s efforts for FIRM.

Working with village leaders and local entities known as Beach Village Committees, the fishers have been learning about conservation measures designed to regenerate the quality and quantity of fish in the lake and to safeguard their environment.

Fishers and their families are also learning about climate trends and extreme events.

“We are in a vicious cycle,” says Mattson. “If there is increased climate variability, people will be more vulnerable than they should be unless resources are managed differently.”

With the project’s support, the community focused on “bringing back the fish” and drew up a plan of action which included the adoption of new by-laws and the creation of two no-fishing zones that provide suitable breeding and nursery habitats for fish.

“Community members have embraced conservation,” Msusa says. “Trees have been planted; river banks are better managed; fishing gear and activities are more controlled, and the fish populations and species are increasing.”

Alfred Juma, a 40-year-old fisher who participated in the project, says the training empowered the fishers and gave them skills to assess their resources and environmental problems and how to take appropriate action.

“We all took responsibility for fisheries management, and we have seen an improvement in our fish species and fish catch,” Alfred says. “The increased fish sales have a great impact on our livelihoods.”

Anasi Devi, a female fisher from Mwalija Village agrees. “For the first time in my life, I heard fishers celebrating and community members chanting and singing! Celebrating a bumper catch at Mwalija was unbelievable. Some women came running to the hillside to call us; we saw the catch with our own eyes! Our sanctuaries have plenty of fish.”

Illegal fishing practices were also highlighted and communities have stepped up water patrols and efforts to reduce the use of destructive fishing gears, such as mosquito nets, that are used to sweep up juvenile fish and eggs. FIRM also promotes seasonal restrictions which help restore fish numbers.

Apart from conservation measures, the FIRM project also promotes small-scale cage-based aquaculture and deep pond technology for rearing local tilapia. Since the availability of water is limited in Malawi’s dry season, deepening the ponds and increasing the volume of water makes them less vulnerable to heat and evaporation.

Vasco Schmidt, FAO Aquaculture and Fisheries Officer in southern Africa, says it’s a long process to educate and encourage fishers and community leaders but the results are encouraging.

Awareness is growing and as fishers are mobilized they are urging other lakeside communities to take action to safeguard the lake and give it a sustainable future to better protect lives and livelihoods.

Virtual fertilizer forum on the cards