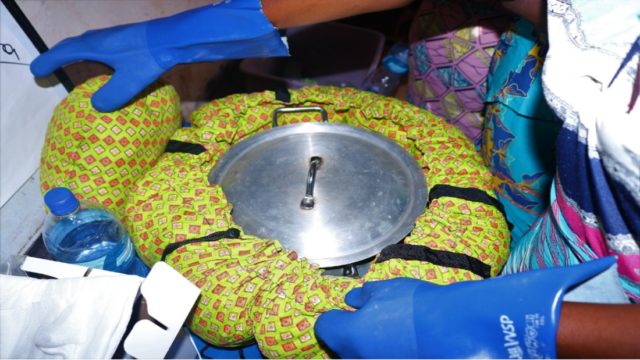 The willingness of women to work as entrepreneurs in developing countries will help reduce poverty and malnutrition. It’s critical to recognize projects that are suitable for women’s lives in rural households as local governments and development organizations seek to promote business opportunities.

The soy package, which includes basic household items including a pot, spoon, thermometer, and cheesecloth, allows entrepreneurs to make value-added soy products on a small scale in their own homes. According to a University of Illinois report, the kit has the ability to boost Malawian women’s economic conditions in a long-term way.

“The larger issue is about adding value to agricultural products in the developing world as a means of raising incomes,” says Pete Goldsmith, director of the Soybean Innovation Lab (SIL) at Illinois and corresponding author on the study, published in Food and Nutrition Bulletin.

“Women are often the ones taking care of children and elders, and holding the household unit together, so if they have access to more money and better nutrition that’s a critical component for improving the standard of living in developing countries,” he explains.

“Not all agricultural technologies are consistent with women’s skillsets, time constraints, and complementary resources. A food-based business such as the soy kit appears to be appropriate for women entrepreneurs but we had to test it to learn if that held up in practice,” Goldsmith says.

Malnutrition Matters, a Canadian non-government organization (NGO), developed the soy kit. The USAID-funded Feed the Future Malawi Agriculture Diversification Activity distributed the kit to more than 200 households over a period of 18 months. The SIL researchers assisted with the rollout and helped train the women in bookkeeping so they could collect data on the project’s economic feasibility.

The women entrepreneurs use the kit to process the soybeans and extract milk, from which they can make products such as flavoured beverages, yoghurt, cheese, and ice cream. The process also yields a co-product, okara, a high-protein pulp used for animal feed or as an ingredient in baking or food preparation.

The soy kit is a viable alternative to the soy cow, a popular technology widely implemented throughout Africa. The soy cow also extracts milk from soybeans to create value-added products. While it does so well, it is an expensive piece of equipment that produces large quantities of milk, requiring dedicated space, electricity, and access to refrigeration, Goldsmith explains.

The soy kit is a much more nimble tool, appropriate for individual households and easily adapted to local markets.

“The products have a shelf life for a couple of hours, and you only make as much as you think you can sell. You don’t need cold storage such as a refrigerator or freezer. You can put the products in sachets with some ice and take them to sell at fairs and by the roadside,” Goldsmith says.

“The women know what people like, how to price the products, and where to find their customers. The project can leverage women’s intrinsic knowledge of the marketplace,” he notes.

Goldsmith and co-author Chungman Kim, an undergraduate student in the Department of Agricultural and Consumer Economics (ACE) who worked on the research for an independent study project, collected and analyzed the women’s bookkeeping data to track the economics of using the kit. To learn more about undergraduate student research opportunities, visit the College of Agricultural, Consumer and Environmental Sciences website.

The Canadian soy kit costs about $200, but entrepreneurs can assemble a similar kit with locally sourced materials for about $80. The women may already have some of the items, and they can use them for other purposes, adding to the kit’s versatility. Even if the women had to take out a small loan to acquire the kit without donor assistance, it would quickly pay off, Goldsmith says.

He and Kim calculated the income generation from the soy kit, estimating gross margins after subtracting production costs such as soybean, water, flavourings, sachets, and plastic bags. There are no capital investments in addition to the kit itself since the women work from their own home, and the project requires no special storage or cooling facilities. The researchers found gross margins averaged 56%, and implicit wages – a means to estimate the value of labour – equalled $2 per hour.

While that is a significant amount in rural Malawi, it doesn’t mean the women can work eight hours a day at this wage. They need to adapt their production level to marketplace demands and time constraints. Still, the soy kit provides a good source of income that aligns with the greater goals of alleviating poverty and malnutrition in Malawi, Goldsmith concludes.

SIL is a USAID-funded initiative comprising an international team of soybean researchers, currently operating at 120 locations in 26 countries.

“We provide technical support to development organizations addressing poverty and malnutrition. We can serve as the technical backstop, helping to determine appropriate ways to solve problems. This is what SIL and the University of Illinois do well,” Goldsmith explains.

He also credits Maggie Mzungu, Charity Kambani, and Elizabeth Venable of the Feed the Future Malawi Agriculture Diversification Activity with helping to roll out the soy kit project and collect data on the ground in Malawi.

The Feed the Future Soybean Innovation Lab (SIL) and the Department of Agricultural and Consumer Economics are housed in the College of Agricultural, Consumer and Environmental Sciences, University of Illinois.