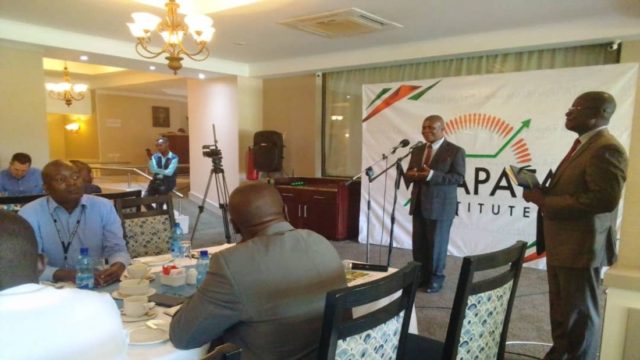 Malawi Agriculture Policy Advancement and Transformation Agenda (MwAPATA) Board chairperson and advisor Richard Mkandawire described the launch as a milestone, saying the institute will help to support homegrown generated policies.

MwAPATA Institute, an independent agricultural policy think tank formed in 2019, has officially been launched at a grand event that took place at Bingu International Convention Centre (BICC) in Lilongwe on Thursday.

He said MwAPATA Institute fits perfectly well in the scheme of operations especially now when the country joined the rest of the continent in reaffirming its commitment to the Comprehensive Africa Agriculture Development Program (CAADP) under the 2014 Malabo Declaration Pact.

“The first commitment of the Malabo Declaration calls for application of principles of evidence-based planning, policy efficiency, dialogue, review and accountability, use of partnerships and alliances including farmers, agribusiness and civil society.

“The Institute is very critical because it will help to add value as well as build careers of young people,” he said.

He added that the Institute is engaging the Malawi Government, the private sector and civil society stakeholders in applied policy analysis, policy outreach, capacity building and policy coordination.

Rural poverty, malnutrition, inequality and social exclusion remain major challenges in Malawi, said Mkandawire, and that it is widely understood that sustained agricultural productivity growth will be necessary to address these challenges.

Once the challenges are addressed, the agriculture sector is expected to transform the economy and raise living standards because of extensive forward and backward linkages between agriculture and the rest of Malawi’s economy.

Mkandawire disclosed that the Institute, which was formed by National Planning Commission in conjunction with Michigan University, has a plan to attain the level of agricultural growth that can transform the country’s economy.

In his speech, Minister Lowe commended MwAPATA in its endeavour to create worth, reaffirming that this is a centre for excellence and independent think tank which his Ministry will utilize its findings.

He added that MwAPATA brings together a coalition of the most important public and private sector, which is expected to relieve the Government, which has all along depended on its work on research findings from foreign institutions.

“This why we are encouraging MwAPATA because I am looking at it as planted tree and that will one day bear good fruits.”

Agricultural Transformation Initiative country director, Candid Nankhumwa said for a long time, Malawi agricultural industry has been depending mostly on tobacco for its export earnings and as its demand has been declining globally, there is need for more research to find alternatives for farmers and this is where MwAPATA comes in.

AICC on drive to improve livelihoods, food and nutrition security in Malawi