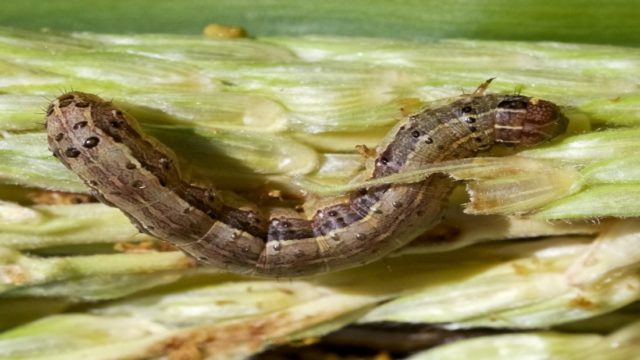 Most Malawians, 80 per cent of the population, are subsistence farmers, depending on agriculture for survival. After harvesting, many farmers sell a portion of their produce to buy necessities for their families.

Andrea Maliza, 35, could not believe his eyes when he gazed at his half-hectare maize field. Just a few weeks earlier, the father of two had reason to believe the healthy, young plants would result in a decent harvest.

“I was downcast to see all the leaves with patches and I knew that something was seriously wrong,” said Mr Maliza, who lives in Ligojo village in the southern district of Mulanje. “Inside the leaves were some worms similar to those that we have seen in previous years.”

“Because of armyworms I will not earn what I need to feed my family, and will also not have money to support my children with school fees and stationery,” added Mr Maliza.

This was not the first time Mr Maliza and hundreds of thousands of farmers in Malawi have experienced an invasion of armyworms. However, according to farmers and agricultural experts, this growing season has been one of the worst.

“Nobody was sure how to deal with the worms. Some people were physically crushing them and applying fluids from bitter crops. I didn’t do anything at all and just left them thinking they will go away when more rains come.” He adds he is yet to receive advice from agricultural authorities.

In 2017, Malawi declared 20 of its 28 districts as disaster areas due to the aggressive pest that feeds on cereal crops like maize, a staple in many countries. That January, armyworms were reported in several countries of the Southern African Development Community (SADC) region, including Namibia, Zambia and Zimbabwe. By April, most SADC countries were affected.

African countries are not alone in battling the pest. Last year, armyworms showed up in 10 Asian countries, including Bangladesh, China, India and Thailand. According to the UN’s Food and Agriculture Organisation (FAO), armyworms are native to the Americas.

According to Malawian agriculture expert Tamani Nkhono-Mvula, the problem has been particularly severe this year, affecting about 150,000 hectares of maize. Just over 1,675,00 hectares of land is used for maize production in the country.

“In terms of harvest losses, I am sure much will be known as we do the second and third round crops estimates. However, in other households, the loss has been up to 100% of the crop, where the only remedy is replanting,” Mr Nkhono-Mvula told Africa Renewal in an interview.

Mr Nkhono-Mvula says that more needs to be done to understand how best to deal with armyworms, given their foreign origin.

“We need to invest quite a lot in research. We probably need to come up with resistant crop varieties and other biological means of controlling the pest, as heavy use of chemicals may have negative effects on the environment,” he added.

FAO has been working closely with the Malawi government to strengthen regular and real-time monitoring of the armyworm, recently rolling out a mobile application dubbed Fall Armyworm Monitoring and Early Warning System.

Together with the European Union, FAO is also working in districts on sustainable armyworm management methods, and conducting nationwide training sessions for trainers who, in turn, train frontline extension workers.

“A number of farmer practices, such as the physical crushing of armyworm egg masses and the use of botanical pesticides like Neem leaves and the tuberous shrub locally known as Mphanjovu (Neorautanenia mitis), have been found to be consistently better at reducing infestation levels and damage than some of the synthetic pesticides,” said FAO Malawi’s George Phiri.

Mr Phiri touted this as a positive development, “offering affordable solutions which farmers can access easily, encouraging the cultivation of plants useful to communities and the reduced use of synthetic pesticides, some of which are highly hazardous and pose major risks to human health and the environment.”

“Malawi recently hosted a delegation from Botswana, courtesy of support of the government of Japan, to learn from Malawian farmers of this successful story,” he said.

The Malawi government says that agricultural workers have been briefed on the importance of an integrated approach to pest management, and is distributing some pesticides to agricultural authorities and districts in armyworm-affected areas.

“As a government, we promote both indigenous and modern technologies to do away with the armyworms. We urge farmers to liaise with extension workers or agriculture officers for advice on the promotion of indigenous ways of controlling and managing the armyworms. This is to avoid killing the crop in the process or rendering it to be hazardous to the environment or humans,” said Priscilla Mateyu, a spokesperson for the Ministry of Agriculture, Irrigation and Water Development.

“Mobile vans have been deployed to affected areas for sensitization on control of the outbreaks. Efforts have also been made for the mobile van to sensitize farmers in areas where there are no outbreaks, to alert them,” said Ms Mateyu.

With just a few weeks left before harvest, Mr Maliza is still not sure how much produce he will be able to salvage. Before the invasion, he harvested 10 to 20 bags of maize per year.

“Looking at the size and quality of the cobs, I doubt if I am going to get even half of that,” he said.