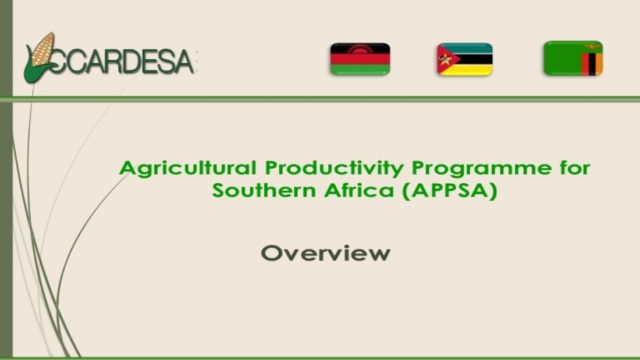 Agricultural Productivity Program for Southern Africa (APPSA) was a six-year project supported by the World Bank to promote a regional approach to agricultural technology generation and dissemination in three SADC countries, namely Malawi, Mozambique, and Zambia.

Patricia Dzimbiri (37) is one of the successful female lead farmers who participated in the Agricultural Productivity Program for Southern Africa (APPSA) project from 2013 to 2020.

Based in Chinguluwe Area, in Salima District, Malawi, this 37-year-old woman worked directly with APPSA research and extension agents to help champion the demonstration of the technology in agriculture in her community.

Dzimbiri participated in farmer field trials for Conservation Agriculture (CA) and maize-legume intercropping for three consecutive years. She is part of the 41 300 lead farmers in Malawi, Mozambique and Zambia who have participated in this project.

“Munda woyala mapesi mumakhala tchile lochepa…timangozulira (the plot under CA had very few weeds which only require hand weeding because the growth of weeds is suppressed by the ground cover),” said Dzimbiri.

She said CA has helped small-scale farmers with the opportunity to achieve food security in the face of challenges of poor soils, poor rain and poor yields.

Dzimbiri testified that her maize crop from CA plot grew faster and bigger than from the conventional maize plot.

The technologies that have been promoted by APPSA over the past six years aimed at improving the farming practices in the region inspired Dzimbiri to scale up her farming project.

“I plan to expand CA, maize-legume intercropping to two acres of land in the next cropping season because the results of this project were amazing,” Dzimbiri said.

CA is a set of soil management practices that minimize the disruption of the soil’s structure, composition and natural biodiversity.

As expected of all lead farmers who participate in the APPSA project, Dzimbiri has also disseminated the knowledge she learnt from the researchers to her fellow farmers.

She mentored seven fellow farmers from nearby villages in CA, and to over 70 farmers through field days.

“In Chimbonila District the use of legumes flour to prepare porridge improved the health of malnourished children in the district. Weight gain for some of the orphaned children who were fed legume porridge was recorded,” said Murata.

She said several farmers in the targeted communities have been inspired to increase legume production both for sale as grain and also to processed products.

“Other farmers are increasingly showing interest in producing and using beans for processing into flour, baking cakes, biscuits, bagias and porridge. They are also interested in proper packaging of their grain legumes so that they can attract better markets which pay more for quality products,” added Murata.

Murata said the benefits of agro-processing legumes has encouraged many farmers in the district to increase their legume productions as well as to kick-start legume processing as an income-generating venture.

“They have organized themselves in “legumes groups” which aim at sensitizing other farmers in legume production and processing,” added Murata.

She said the upscaling of legume production is expected to lead to an increase in agro-processing and improvement in market access, thereby leading to food and nutrition security, and improvement of smallholder farmers’ income.

APPSA project in Malawi, Mozambique and Zambia was launched in 2013 and concluded in January 2020. In the six years, the project has benefited over 750 000 households. The 41 300 lead farmers established more than 5 000 demonstration plots on various technologies and management practices that were hosted at 3 000 field days.

During the same period, a total of 7 968 seed and food fairs were conducted. Food fairs focused on value addition to legumes, maize and rice grain and APPSA promoted seed varieties among the farming communities and the private sector for seed multiplication so that they can be readily available and accessible to the farmers.

APPSA which is a brainchild of the World Bank was launched in 2013 with the aim of generating and disseminating technologies to farmers within and among participating countries in Southern Africa. The project also builds capacity for host national research and development systems and enhances regional collaboration.

Although it was a World Bank initiative, APPSA is coordinated and facilitated by the Centre for Coordination of Agricultural Research and Development in Southern Africa (CCARDESA).

Following the success stories of the three countries, APPSA is set to commence in Angola and Lesotho this year for the next six years.

Murata said implementing the project in Angola and Lesotho has been affected by the outbreak of the COVID-19 pandemic in the region.