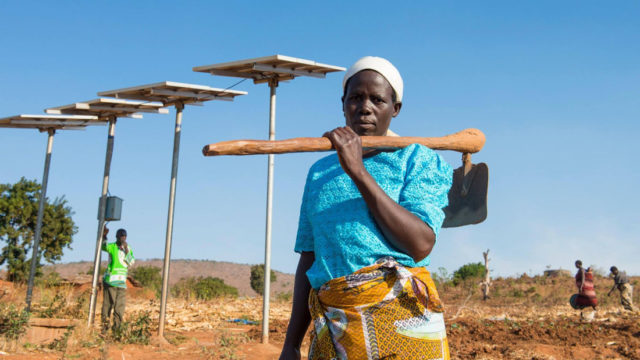 “In the past many farmers relied on rain-fed agriculture to grow their food,” said Edwin Liwonde, a subsistence farmer in the flat area, which is also prone to floods.

But now, worsening dry spells “mean no hope for harvests,” he told the Thomson Reuters Foundation in an interview.

Faced with growing losses, however, farmers in Zomba district have come up with an innovative way to adapt: Solar-powered pumps used to pull up underground water, and newly constructed water storage dams that are also used to farm fish.

The changes, chosen by community members, put in place by Malawi’s government, and backed with $4.5 million from the Global Environment Facility, aim to help 5,800 households become more resilient to climate pressures – and show what might be scaled up in other drought-hit areas.

In Mwambo and Ngwerelo, two traditional authorities in Zomba, and at villages in Ntcheu district, solar panels supported on steel poles provide the power to pump groundwater from new borehole wells into reservoir tanks capable of storing at least 10,000 litres.

A share of the water then is piped from the tanks to hydrants constructed in nearby fields – with another share going into the villages for household use.

The water systems, put in place last year, are capable of irrigating about 20 hectares of land each, Liwonde said.

At Gunde, a village in central Malawi’s Ntcheu district, the system provides irrigation water and safe drinking water to 700 people in the area, said Ntombi Kafere, a member of the Umodzi irrigation scheme.

Farmers there expect it will boost incomes, especially as it lies close to Tsangano road, which marks the boundary with Mozambique and which links the area to nearby markets.