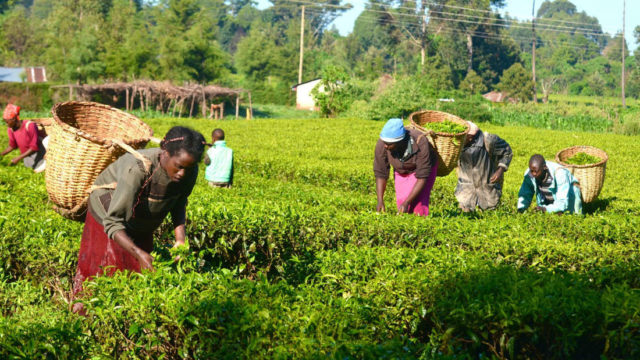 If Africa is to feed itself, and if land rights are to be applied universally, the advancement of African women farmers is a fundamental necessity, and the ability of women to access microfinance is key.

Over the past few years, international banks, financing institutions and micro-funders have increased their focus on the most stubborn obstacle facing female farmers in Africa – the inability to expand beyond subsistence farming due to patriarchal systems that prevent them from owning land and enjoying a degree of control over the means of production, which in turn stifles their ability to leverage finance.

Disrupters of traditional banking practices, and micro-finance funders, are essential in transforming this scenario. Among these one stands out: Echo Network Africa (ENA), formerly Kenya Women Holding (KWH), the brainchild of micro-finance banker and entrepreneur Dr Jennifer Riria.

Over more than three decades, KWH’s subsidiary, Kenya Women Finance Trust (KWFT), has distinguished itself as the largest micro-finance bank in Africa, having disbursed $1.3bn in loans to more than five million women, some 80% of them living in Kenya’s rural areas. Each loan averages less than $600 – a small amount but it can enable a woman to generate enough profit to feed and educate her children, and often, to scale up to a profitable farming business.

“Our landmark achievement at KWFT and ENA has been to open the banking sector to women,” Riria told Fanaka TV, Kenya’s premier business channel, in August 2018. “If women in Africa are to be empowered, they need to be financially independent. And that means access to resources – to land, to houses, and to businesses.”

The case for women joining agricultural value chains is clear. Women contribute an average of 40% of crop production labour across six sub-Saharan African countries, according to the World Bank’s LSMS-Integrated Surveys on Agriculture, and more than 50% in Malawi, Tanzania, and Uganda. Yet they produce significantly less than men per hectare, ranging from 23% less in Tanzania to 66% less in Niger, according to the Cost of the Gender Gap report by the World Bank and UN Women, published in 2015.

Male-female differences in farm labour, non-labour inputs (for example, volume and quality of fertiliser and pesticides), childcare responsibilities and crop choice are identified by the World Bank as the chief drivers of Africa’s gender productivity gap.

In addition, gender differences in the access, control and use of land also play a role, since having land available is a precondition for entry into agriculture, and determines access to finance. “Credit may be linked to many of these factors, as it can be a pivotal source of liquidity to help women farmers access inputs, including labour, and even to switch into higher-value crops,” says Flore de Préneuf, Communications Lead, Food and Agriculture Global Practice for the World Bank.

According to the World Bank’s statistics, the annual costs of these gaps range from $67 million in Uganda to $105 million in Tanzania. “In other words,” says de Préneuf, “these are the annual gains that could be achieved through parity in agricultural yields. These costly gaps can also drag down welfare: our estimates show that closing farm gaps could lift many individuals out of poverty in Malawi (238,000), Tanzania (80,000), and Uganda (119,000).”

In Kenya, it was the enduring poverty of the female smallholder farmers she grew up with that seeded Riria’s desire to extend them lines of credit. “I left my job at the UN and joined KWH. We began with small loans of two or three dollars, and the women would pay this back and graduate to larger loans. One of our women farmers began with $200 and is now running a manufacturing business, and borrowing over $10,000. Banks, once closed to women, are now finding that women are bankable and creditworthy,” she says.

One of these farmers is fish farmer Betty Nyongesa, who with loans from KWFT has paid for her children to go to school, built a house, acquired a herd of cattle, and bought a plot of land where she has built a small shop, from where she runs her business. “My community used to believe that a woman was meant to stay at home and take care of the kids. They never thought that we could be the backbone of our community,” Nyongesa told her interviewer in an ENA documentary. “Kenya Women has empowered us, and our men now respect us.”

KWFT today has a network of 245 offices spread out across 45 of Kenya’s 47 counties, and as at December 2017, it had a loan book of $192 million, assets valued at $286 million and deposits of $162 million. ENA, meanwhile, is the development arm that bolsters KWFT’s micro-financing activities, collaborating with broad community-based organisations (CBOs) and alliances to innovate viable initiatives and provide mentorship to women in the agricultural and entrepreneurship sectors.

“The KWFT clients (801,317) are all members of ENA, because women need more than finance, they need knowledge of business and accounting practices, and access to the markets and digital support systems,” says Riria. Digital technology is proving revolutionary for women farmers across the continent, giving them access to both finance and knowledge. “Our banking services can now be taken to the women in their villages, where they can do their own banking online,” Riria says.

There is a proliferation of other initiatives in this space. In May 2018, the World Bank approved a $70m e-agriculture project in Côte d’Ivoire, which will help women farmers and other beneficiaries harness new technologies to learn about farm practices, find linkages to buyers, and access digital financial services. “This project will ensure that farmers have timely information on key aspects of the agriculture value chain such as the seed market,” says Pierre Laporte, World Bank country director for Côte d’Ivoire.

A feasibility study is also being done on integrating information communication technology (ICTs) into two large World Bank investment programmes: the Irrigation Development and Support Project (IDSP) in Zambia and the Kenya Agricultural Productivity and Agribusiness Project (KAPAP), with the specific aim of strengthening women’s participation in commodity value chains.

Meanwhile, one of the recommendations of a 2017 World Bank report, Mobile Technologies and Digitized Data to Promote Access to Finance for Women in Agriculture, is to leverage, through digitisation, the strong role that collective savings groups play in rural women’s lives. The aim is to increase their efficiency and transparency and enable women to ultimately build their own digital financial profiles.

Third-party credit scoring companies that use smartphone data for analysis, such as Lenddo, which provides credit scoring to banks and MFIs, as well as direct lenders such as Tala, are also being encouraged to expand their services to women in the agricultural sector. According to the report, investment is called for to design gender-responsive bundled and customised service offerings that meet the financial priorities and life-cycle needs of women farmers. Currently, products are designed around cycles most relevant to men.

Finally, the report recommends: “Drive the collection and use of digitised data to expand bank offerings and financing to women in agriculture. The trend in alternative credit scoring holds promise for women, who, research corroborates, frequently lack fixed collateral and financial histories they can present to a lender.”

As these interventions transform the agricultural sector in Africa, its female farmers will begin to make far more significant contributions to their agricultural economies. In Kenya, Riria and her organisations, KWFT and ENA, have set Kenya’s 2022 general election as their deadline to make a marked difference in women’s political and financial power overall.

“Women can now benefit from a ‘democracy fund’ that we have set up to train and facilitate women to become more competitive and to take up political leadership positions, ahead of the 2022 general election,” Riria told Kenya’s Daily Nation news channel in March 2018.