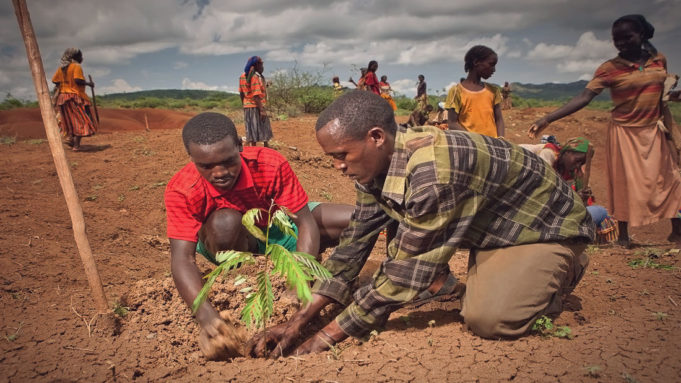 This launch follows a directive from President Arthur Peter Mutharika in response to the recent disasters that have left many people without food among other property.

At the launch in Thabwa Camp under Chief Mulilima in the district, Mwanamvekha added that President Mutharika is also urging the flood survivors to partake in winter cropping.

The national farm input distribution exercise is expected to benefit about 100,000 households across the country who was heavily hit by disasters and floods in particular.

“This should remind us that climate change is real. We have so many challenges due to rampant deforestation and farming along river banks. This should also tell us of the lack of interest to plant trees. It is everyone’s responsibility to plant trees and restore the environment if we are to achieve the Malawi Growth and Development Strategy number III,” said Mwanamvekha.

The minister further said it was the wish of government to increase productivity and ensure enough stocks of maize so that no one dies of hunger.

“This year our ministry is distributing maize seeds, potato vines and groundnuts among others. At the same time, as government we understand that the flood survivors lack food and shelter. It is our responsibility to ensure they acquire or access these,” Mwanamvekha added.

On his part, Paramount Chief Lundu commended President Mutharika for the timely support.

“We want to assure you that we will do winter cropping to restore our lost glory. We are hoping that as the people are going back into their fields, they will be provided with some relief food items because they have nothing to eat and might take a bit of time for the winter crops to mature,” added Lundu.

On the other hand, Lusizi Nhlane ,Chikwawa District Commissioner alleged that over 9,000 hectares of land was affected by the floods.

“We have 4,487 hectares of maize fields with 2,245 hectares of rice as well as 500 hectares of cassava fields destroyed in the just ended floods. The other hectares cover other types of crops,” Nhlane  stated.

The minister has further called for concerted efforts to improve on environmental restoration by among other things planting more trees.